In solidarity with Ukraine, U2 performs surprise concert on Kiev subway | The Sound and the Fury 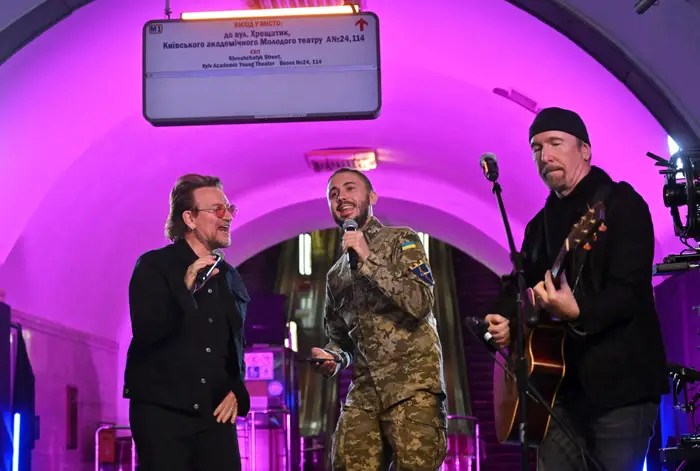 The Irish band U2 performs a surprise show on the Kiev subway, in Ukraine //Disclosure

Singer Bono and guitarist The Edge, from U2, played a surprise concert this Sunday, 8, at a subway station in Kiev, capital of Ukraine. The improvised performance took place at Khreschatyk subway station and featured songs such as Stand By Me, performed alongside the Ukrainian band Antytela, as well as classics by the Irish band, such as Sunday Bloody Sunday, Desire and With or Without You.

On Twitter, the band wrote that they were invited by President Volodymyr Zelensky and agreed to travel to the country to show their solidarity. The presentation took place acoustically, just a guitar and some microphones. It is worth remembering that the city’s subways were transformed during the war with Russia into an important bomb shelter.

“The Ukrainian people are not just fighting for their own freedom. It’s fighting for all of us who love freedom,” Bono said during the show. “We pray that you will enjoy some of this peace soon,” he added.

In the epicenter of global history. Bono from @U2 on the metro station in Kyiv singing for Ukraine. Such a historical moments to show solidarity and pay global attention on putin’s invasion. Please repost and stand with Ukraine by pushing your govts to help us with weapons/money pic.twitter.com/j5aKrkPS60

President @ZelenskyyUa invited us to perform in Kyiv as a show of solidarity with the Ukrainian people and so that’s what we’ve come to do. — Bono and The Edge #StandWithUkraine