Shirtless heartthrob of the 2000s, Marcos Pasquim tells why he avoids selfies

Think fast: What do the novels “Kubanakan” (2003), “The fifth of hell” (2002), “Pé na jackaca” (2006) and “Uga uga” (2000) have in common? The protagonist was almost always shirtless! Marcos Pasquim is amused when he is remembered for the roles that abused sensuality in several TV Globo soap operas from the early 2000s.

But now, at 52, he avoids such exposure. On social media, he almost never takes selfies. “I don’t like to photograph on a daily basis. But if you ask me what I would like to be if I weren’t an actor, I say I would be a photographer. I think it’s a fantastic profession, it brings its own look at things. I just take very little pictures of myself. People come to my instagram and complain that I post little. I’m not in the habit,” he tells the column.

Quibbler says this has nothing to do with getting older, something he swears he treats very well in his head. “It’s part of my life and my profession too. I want to grow old to play more mature roles. I don’t do anything (plastic) on my face, nor do I intend to. There’s paper for everyone. You have to have people to make the parents of the youngest class. No problem playing the protagonist’s father!”, he continues, who will soon be in the “Fim” series, based on the book by Fernanda Torresand still this year, the film “Desapega” premiered, alongside Gloria Pires. 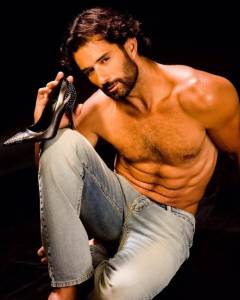 Marcos Pasquim, when he appeared only shirtless on TV Reproduction/Instagram Continues after advertising