Elections 2022: Bolsonaro managed to sow discredit in the electoral process

When William Burns, director of the Central Intelligence Agency (CIA), met with Jair Bolsonaro at the Planalto Palace in July last year, it was six months since the invasion of the Congress headquarters in Washington, encouraged by Donald Trump, who refused to accept defeat at the polls to Joe Biden.

Bolsonaro supported Trump, antagonized Biden during the American election campaign and took a month to authorize the diplomatic ritual of greeting the president-elect of the United States. Biden left Bolsonaro in the diplomatic fridge and took 15 months to receive the Brazilian ambassador.

Burns is a seasoned diplomat with authoritarian governments, recognized in Washington as the member of Biden’s team who most frequently interacted with Russian President Vladimir Putin, from the time he left the board of the FSB (replacement of the Soviet KGB) to the cabinet of Boris Yeltsin.

He was in Brasilia with two priorities on the agenda. In one was the American cooperation in the construction of a 5G network exclusive to the Brazilian government, on the fringes of the national network where technology from Chinese companies predominates.

Another was a message of “concern” from the White House about the spread of distrust in the Brazilian electoral process promoted by Bolsonaro – as Reuters reporters Gabriel Stargardter, Matt Spetalnick and Jonathan Landay revealed yesterday.

Next, National Security advisors Jacob Jeremiah (“Jake”) Sullivan and Juan González were with Bolsonaro, with similar messages. The conversation derailed from the moment Bolsonaro began to question the legitimacy of Joe Biden’s election and to repeat accusations, without evidence, of fraud in the Brazilian voting system.

Three Bolsonaro aides spoke with Burns in July. Luiz Eduardo Ramos, who had lost command of the Civil House to Ciro Nogueira, leader of Centrão; Alexandre Ramagem, then director of the spy agency Abin; and, Augusto Heleno, head of the Institutional Security Office of the Presidency, who participated in all the meetings.

Yesterday, Heleno accompanied Bolsonaro in an official denial of Burns’ comments regarding Bolsonaro’s public initiatives to degrade the electoral process — emulating Trump in the campaign won by Biden. At the time, Lula was beginning to appear at the top of the polls.

“It would be extremely inelegant for an agency head like the CIA to go to another country, to come to Brazil, to give a message,” Bolsonaro said in João Pessoa, alongside Heleno and with a Brazilian flag serving as a backdrop in the improvised scenario for transmission via social networks. “We see that it is a lie, a fake news”, he added.

Heleno’s version to Bolsonaro about his and Minister Ramos’ conversation with Burns at the US ambassador’s residence is not known. It is also unknown when the American government concluded that an underground gear was in operation in Brazil, expensive and operated by the Bolsonarist core from the Planalto Palace and Congress, to discredit the electoral process. However, the existence of the fake news factory is certain, whose objective was mentioned as a reason for concern by the White House emissary.

In doubt, it is enough to read the investigation that is in the Federal Supreme Court known as the “Fake News Inquiry. The documents, in part originating from the Superior Electoral Court, are public and describe a conspiracy, organized and financed with public and private resources, to undermine the democratic regime and sow distrust in the electoral process. They expose the involvement of three parliamentary sons of Bolsonaro and a dozen federal deputies.

Outside the records, and the reports of the American government – ​​not yet known – there is evidence left in the political landscape, measurable in research since the second half of 2018, when Bolsonaro began to spread the idea of ​​fraud at the polls, which he never proved. 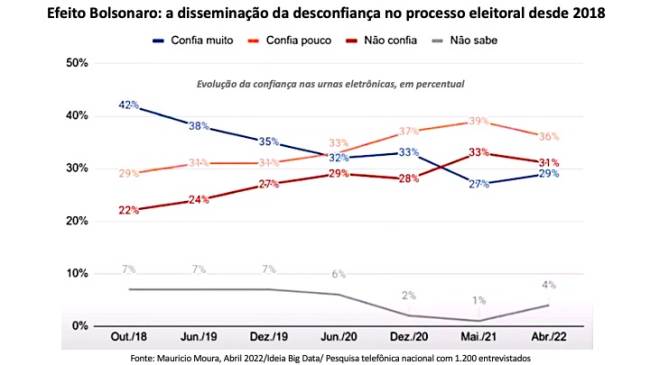 The damage is done, according to surveys carried out since the 2018 campaign by sociologist Mauricio Moura, from the Idea Institute. A few days ago, in a debate, he presented some results obtained from 1,200 interviews about Brazilians’ confidence in the elections.

In October 2018, when Bolsonaro defeated Fernando Haddad, from the PT, 49% of voters considered the electoral process based on electronic voting machines – a technology developed in the 1980s in civilian and military laboratories, with the cooperation of Abin technicians – very reliable. Last month, it was only 29%.

On the other hand, distrust increased from 22% to 34% in this period. It means that one in three voters assimilated the discredit spread by Bolsonaro, almost daily, in the electoral process. And at least a quarter of the electorate assumes that the printed vote is less susceptible to fraud, although history shows the opposite. 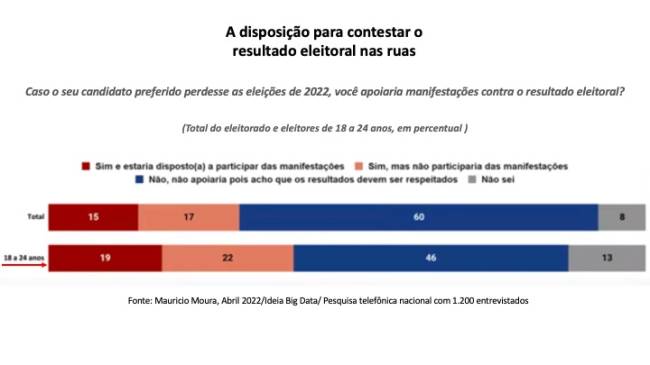 Remarkable, too, is the number of people willing to contest the election result, if their preferred candidate is defeated at the polls. As a whole, it is a minority (15%), but represents a large contingent considering the electorate of 143 million. And more: with a significant participation of young people (19%), between 18 and 24 years old.

Yesterday, Bolsonaro announced a “parallel investigation” by a private company. This has been around for a long time, it’s part of the routine of party life. For months he has insisted on a kind of intervention by the Armed Forces, to protect the Electoral Justice.

His insistence on the willingness to contest the electoral result indicates the obvious: Bolsonaro wants to be reelected in the scream.