Vera Fischer: “I delivered the wonderful woman I am” | SEE People

“I remember as if it were today the day I photographed with Aderi Costa in his shed in downtown Rio. It was magical, it turned me into many. I went to (French actress) Sarah Bernhardt with her theatrical faces in a solemn atmosphere, I was (Italian actress) Eleonora Duse more dreamy, and I went to the divine (Swedish actress) Ingrid Bergman, who I love! We took pictures remembering moments of my life. I gave him the wonderful woman I am!”.

That’s how Vera Fischer tells the column about his participation in the book “Cais”, which the photographer from Minas Gerais I joined Costa launches this Wednesday, 4th, at Copacabana Palace, and in São Paulo, 11th, at Livraria da Travessa de Pinheiros.

In common, the images in shades of black, white and gray highlight beauty, melancholy and drama in different situations. Correspondent Scamparini defines Aderi’s photographs as “pure drama”. “They don’t even look like portraits, they flow like an animated film in front of our retinas”, she says. Carol Castro is another project enthusiast. “I have always loved photography. And each photographer has his own look, his ephemeral choice of capturing the now”. Montaleone recalls that this was a different experience. “I’ve been photographed many times following a mood. But in this rehearsal it was cool to see how he managed to capture all the chaos that was inside me”, says the actor.

Among Aderi’s upcoming projects, a new book to gather some of the more than 10,000 photos produced during ten years of behind-the-scenes coverage of fashion weeks in Brazil, which include names such as Shirley Mallman e Gisele Bundchen. 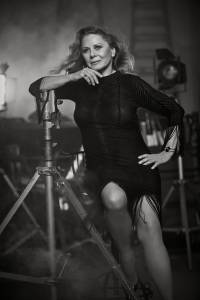 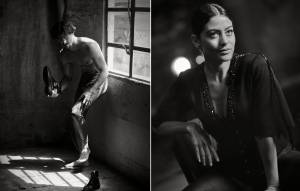