Artist on court decision that vetoes drag shows: “Censorship on the skin”

A possible opening date for the exhibition “Duo Drag”, by the photographer Paulo Vitale, with 120 portraits of fifty drag queens and 35 video testimonials from some of them, in addition to the launch of the book “Drags”. The postponement is due to a court decision determining the suspension of activities at the Museum of Sexual Diversity (MDS), in São Paulo, where the exhibition, curated by Leonardo Birchewould open on the last Saturday, 30.

“I was caught in passing, a coincidence that my show was the ball of the day. The court decision resulted in the closing of the museum… I was surprised. I have no direct connection with the progress of the process, but it is not possible to dissociate the possible motivations of the deputy from a larger movement”, says Vitale, referring to the state deputy Gil Diniz (PL).

Diniz filed a lawsuit questioning a project to expand the MDS, in the amount of 9 million reais. In the argument, the deputy, who is a coreligionist of Jair Bolsonaroquestioned the suitability of the managing organization and insinuated that the museum was an “exhibition room” for the LGBTQIA+ movement.

For Vitale, this is a case of censorship. “I don’t think my show offended anyone or caused any embarrassment. The museum has this theme as a recurring agenda. This never happened to me! It was the first time I felt the feeling of censorship on my skin. Setting up the project in a public museum and being prevented from being visited… I was shocked!”, he says.

The authorial project had as an idea the exhibition in this space, since it is located in the center of the city, close to several drag queens concert halls. “The design of the museum allows you to envelop (cover) the facade. I acted as if it were a big drag stage. Even censored, part of the idea is visible to those who pass outside”, warns Vitale, with 32 years of experience.

The museum remains closed. On its facade, posters were pasted by protesters against the court decision. 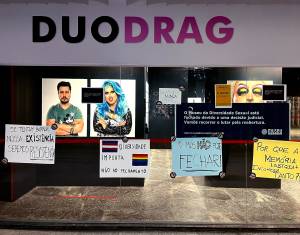