Luiz Ináciolet me introduce you to Maria Osmarina, better known as Marina Silva.

She was born in extreme poverty in Brazil, in the middle of a rubber plantation, and was raised on a stilt before becoming a prominent national leader – to the point of being chosen to carry the Olympic flag at an important international event.

Maria Osmarinalet me introduce you to Luiz Inácio, better known as Lula.

He was born in extreme poverty in Brazil, in the middle of the wild, and was raised in a mud house before becoming a prominent national leader – to the point of being called “the guy” by Barack Obama, at an important international event.

Luiz Inácio, sorry to call you that, but I need you to remember where you came from, from the beginning of your life, from your roots. Look, Maria Osmarina is black, and she faced the ailments of hunger: her parents had eleven children, of whom only eight survived.

Maria Osmarina, sorry to call you that, but I need you to remember where you came from, from the beginning of your life, from your roots. Look, Lula is brown, and he faced the ailments of hunger: her parents had twelve children, of whom only eight survived.

Luiz Inácio, see if you won’t recognize this story: Maria Osmarina left the rubber plantation with her family, on foot through the woods, running away from other things, including poverty, to try life in the big city. In this case, Manaus.

Maria Osmarina, see if you won’t recognize this story: Luiz Inácio left with his family in the wild, on a pau-de-arara, running away from other things, including poverty, to try life in the big city. In this case, Guarujá.

Luiz Inácio, this one is awesome: Maria Osmarina became Marina when she added her name on the occasion of the 1986 election, a time when candidates still could not use nicknames in official names.

Maria Osmarina, this is awesome: Luiz Inácio became Lula when he added his name on the occasion of the 1982 election, a time when candidates were not yet able to use nicknames in official names.

There are so many coincidences.

I don’t know if you know, Luiz Inácio and Maria Osmarina, but Lula and Marina have already managed, together, – in the past, of course – to reduce deforestation by 80%, a historic feat for the preservation of the Environment.

It is even more curious that you, Luiz Inácio and Maria Osmarina, have the same surname: Silva. The most popular in Portugal – our terra mater, where we came from -, and in Brazil, where we do not intend to leave.

I know – and you also know: there’s another popular leader out there, who recently took power. He’s a horror. I don’t know exactly where he came from, but I know that he defends mining and miners, the kidnapping of indigenous lands, and he doesn’t give a damn about the destruction of the environment.

Don’t care about the destruction of the Jungle, Silva’s!

He – I wish his name were unnamable – also makes fun of the deepest pains of the other, constantly.

But this leader appeared, and he brought a multitude with him. You know those people who took power in the dictatorship and we thought it didn’t exist anymore? People who advocate torture and torturers. Who does that nowadays? You haven’t done such a thing with enemies since the Cold War. Being against torture is a universal value! Who doesn’t know this?

Remember Chico Mendes? I was told that you two, Luiz Inácio and Maria Osmarina, mourned his death together. There have been such horrible things happening now in deep Brazil. Two Yanomami indigenous children were murdered last week.

I imagine you two have suffered for it too.

In fact, I knew they had the opportunity to see each other, but they didn’t. They barely got to know each other.

Yes, I also remember, Lula’s group lied about Marina at a key moment in the country’s history. It turns out that, on second thought, I don’t know if I know other popular leaders who were born so deeply rooted in real Brazil.

I’ll stop here, since this column is big, very big.

What I want to say, Luiz Inácio and Maria Osmarina, is that life takes us along paths in which we are forced to make choices, and choices have consequences. But in her, in life, nothing is definitive. We can change at any time in order to evolve. Sometimes it is necessary to step back – depending on the gravity of the moment – ​​and hold hands.

Who knows, with the help of you, Lula and Marina Silva, after (re) getting to know each other, they, Luiz Inácio and Maria Osmarina, can put their differences aside and focus on what is best for the country. Especially at such a scary time, like this, when democracy is at risk.

The other day I looked for a picture of you two together. Not old, current! It would be good for the country to see the two of them together now, in this very difficult time. There are still differences, I know. But there is much more in common, as you know.

Do not you think?

I’m not even saying it, actually. It is your life that speaks for itself. 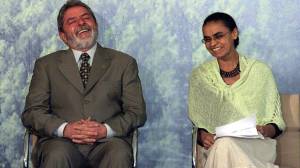 Former President Lula next to the then Minister of the Environment Ambiente, Marina Silva, at the installation ceremony of the Coordinating Commission of the National Forestry Program, at Palácio do Planalto, in Brasília (2004) Joedson Alves/AE/VEJA Continues after the publicity