The senator has maintained a strong campaign agenda across the country. Despite this, she lives with allies who want the party to be with Lula or with Jair Bolsonaro /

The march of mayors took to Brasilia, last week, thousands of representatives from all over the country. In the wake of the event, Jair Bolsonaro, Ciro Gomes, Simone Tebet and João Doria spoke to the political audience and were applauded. Lula was the only one not to attend the meeting, citing scheduling problems.

In a parallel movement, Gomes took advantage of the presence of the allies in the federal capital and brought together pedestrian cadres for a conversation about his government plan. Realizing that Simone Tebet had not planned something similar – she made a smaller event for a few emedebistas –, a wing of the MDB did not skimp on criticizing the leaders of its pre-campaign.

“If Simone was given a standing ovation, recognized by the municipal leaders (at the march), what is missing to make the meeting with the municipalist and Medebistas leaders? How about getting out of the arrogance and arrogance of her silence and humbly talking to each and all of us? We await your modest return”, wrote an emedebista in the party’s WhatsApp group, which has campaign advisors for Simone, Baleia Rossi, as well as federal deputies, mayors such as Ricardo Nunes, from SP, former senators, former ministers and former – governors of the acronym.

“Simone is being negligent, covering her coordinators (the organization of the big event). She is the candidate. Too much amateurism or lack of desire to professionalize everything. If people can’t find time to organize this, let them delegate the function”, wrote another emedebista.

In the face of criticism, the only one to defend Simone was former minister Carlos Marun. The senator has maintained a strong campaign agenda across the country. Despite this, she lives with allies who want the party to be with Lula or with Jair Bolsonaro. 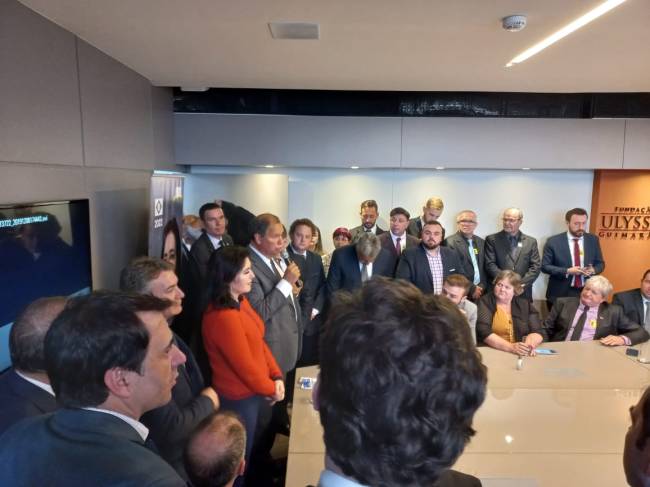 Simone Tebet participated in an event with part of the emedebistas that went to Brasília last week ./. Continues after advertising