The controversial statements by former president Luiz Inácio Lula da Silva (PT) became the target of a coordinated attack by President Jair Bolsonaro and his sons, Senator Flávio Bolsonaro (PL-RJ), Federal Deputy Eduardo Bolsonaro (PL-SP) and councilor Carlos Bolsonaro (Republicans), with great repercussion on social networks. On Saturday, during an event to receive formal support from Psol, Lula promised that, if elected, he intends to close the shooting clubs created during the Bolsonaro government and that he would open book clubs.

Caros Bolsonaro was one of the biggest critics of the announcement made by Lula: “I would like to see those who claim to be exempt, for legal weapons, many book writers, instructors and who earn an honest living with it finally take a stand,” Carlos wrote. “None of this is about Bolsonaro. Without being offensive: there is time for all of us to gain strength and win!”. The councilor also hit Lula hard after the former president said that Bolsonaro does not like people, but police. Carlos also criticized Lula for advocating pardon for ‘boys’ aged 17 to 20 who are in prison. “The ex-convict doesn’t stop…”, wrote Carlos.

President Jair Bolsonaro took to the networks to criticize Lula. “While some people think that police are not people and that they have to release young thieves, drug dealers and thieves, we always defend good citizens. Good night everyone!” Bolsonaro wrote. In the video released on the internet, the president reproduced an article from VEJA, showing a historical reduction in farm invasions. 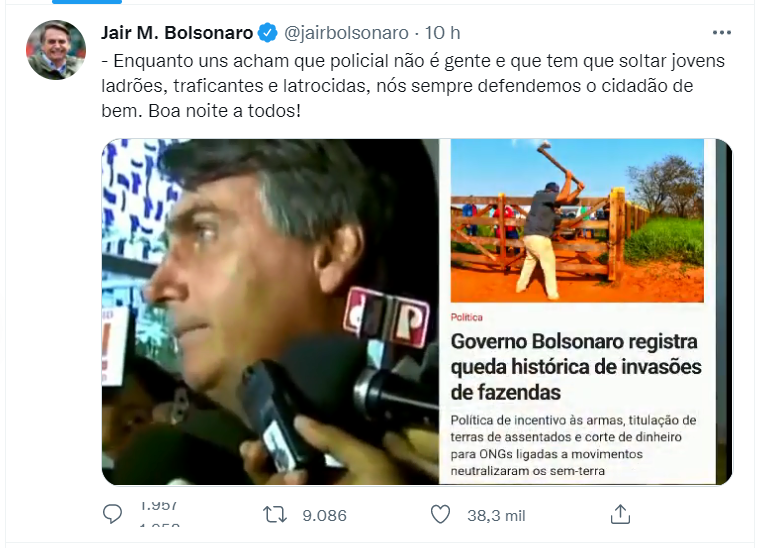 Flávio Bolsonaro posted messages on social media criticizing what he considered Lula’s ‘debauchery’ of religion and also a message criticizing Lula for defending the closing of shooting clubs. The senator also criticized Lula for saying that Bolsonaro does not like people, but police officers.

Eduardo Bolsonaro has also focused attacks on Lula. In one of his last messages, he criticized the alliance between the former president of the Republic and the former governor of São Paulo Geraldo Alckmin (PSB). “The left always pretends, but in the end it always ends up uniting garbage and sewage against Bolsonaro”, criticized the deputy.