Amidst crying and gnashing of teeth, PSOL meets to vote support for Lula | Machiavelli

Largest left-wing party that emerged since the PTwith eight federal deputies and the mayor of a capital (Belém), the PSOLwhich was born from a dissidence within PTismo in 2004, still at the beginning of the first term of Luiz Inacio Lula da Silvaas an opposition to the left of the government, is today the most divided congress in its history, but which must decide to support PT for the Presidency of the Republic.

If the PSOL actually approves support for the PT, it will be the first time that the party has gone hand in hand with PTismo since it was created. The acronym launched its own presidential candidates in 2006 (Heloísa Helena), 2010 (Plínio de Arruda Sampaio), 2014 (Luciana Genro) and 2018 (Guilherme Boulos).

The historic decision will not be passed without weeping and gnashing of teeth. The division in the party in relation to having its own candidacy or supporting Lula will be the major theme of the PSOL Electoral Conference, the party’s highest instance, this Saturday, 30, in São Paulo, to discuss the party’s strategy in this year’s elections.

Although the national leadership, headed by Juliano Medeiros, has signaled support for Lula – and has already advanced a lot in this direction – there is a minority current in the party that wants to launch the candidacy of federal deputy Glauber Braga (RJ) for the Presidency. There are still many criticisms in the caption of the choice of Geraldo Alckmin (PSB) to be Lula’s deputy.

There are also disagreements over Guilherme Boulos’ decision to give up his candidacy for government in São Paulo in favor of Fernando Haddad (PT). The dissident group even launched the name of councilor Mariana Conti, from Campinas, and this theme should also spark the meeting. 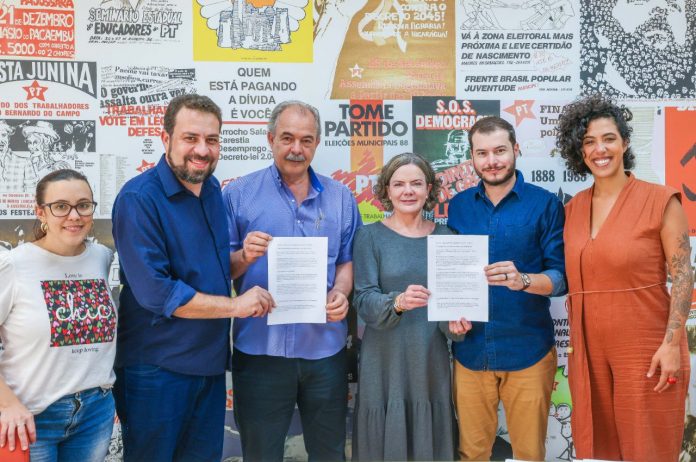 PT and PSOL leaders present a document with conditions for the formation of the alliance, in a meeting in SP PSOL/Disclosure

The probable adhesion to Lula will involve the imposition of several programmatic points of which the PSOL says it will not give up. A list of twelve initial proposals has already been drawn up, and includes the repeal of pension and labor reforms, the end of the spending cap, the “resumption of public control of Petrobras” and the “social control over the monopolies of the mainstream media”. Most of them have already been accepted by the PT.

Because of the PSOL meeting, the PT decided to postpone the launch of Lula’s candidacy to May 7, which was initially scheduled for this Saturday. And it’s not for less: the adhesion of the PSOL will make Lula close a front with all the main left parties.

The PT already has the support of the PSB – which appointed deputy Alckmin – and the PV and PCdoB, with whom he formed a federation. On Wednesday, the 27th, he received the formal support of the Network, in an articulation led by Senator Randolfe Rodrigues (AP), who will play an important role in Lula’s campaign.

The mass adhesion of leftist acronyms to Lula left not only discontented in the PSOL. At Rede, former senator Heloísa Helena, a former PT member, refuses to support Lula and has already announced that she is sympathetic to Ciro Gomes (PDT). Former minister and also former senator Marina Silva, another former PT member, remains unclear, but criticizes PT, whose government she left unhappy in May 2008 – she was Minister of the Environment.