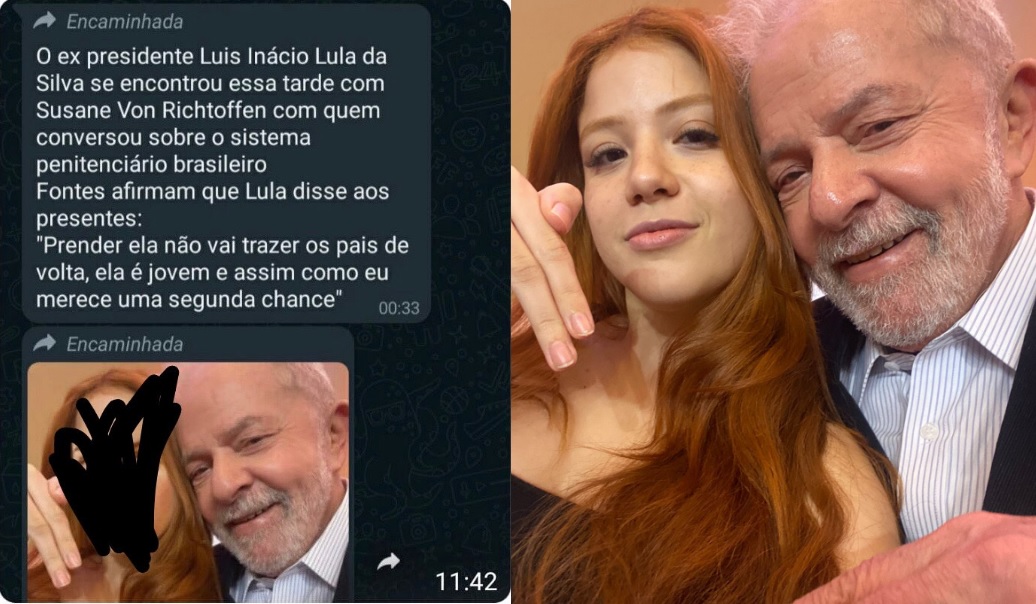 The original photo of Lula with Laura Sabino, and a fake news shared on social networks Twitter/Reproduction

A montage showing the former president Luiz Inacio Lula da Silva beside Susanne von Richtofen, accompanied by false information about a meeting between the two, has been circulating on social networks. That never happened. The original photo is from a meeting between Lula and the digital influencer Laura Sabino.

Laura published a denial on her social media account and criticized the low quality of the montage. News checking services have also attested that it is fake news. The text mentioned an alleged meeting between Lula and Suzane, convicted of killing his parents, to discuss the Brazilian penitentiary system, which did not occur. ” It’s terrible how much these people lie, invent and deceive people. Help spread the truth,” wrote Laura, who appears in the real picture.

The denial had more than 87 thousand likes and almost 18 thousand shares.

Bolsonaro is too dirty. They put a horrible montage on watsap with the photo that I and @LulaOficial we took Wednesday during lunch. It’s terrible how much these people lie, invent and deceive people. Help spread the truth. The real photo is the one on the right. pic.twitter.com/YofAwGDwCV

This is not the first time that Suzane von Richtofen appears in fake news spread on social networks associated with the former president. Months ago, another montage also said that the young woman would have declared votes for the PT, which is also false.